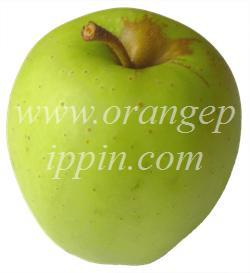 Golden Delicious is a very popular as a supermarket apple variety, and now undergoing something of a rehabilitation amongst apple enthusiasts who are re-discovering its potential.

The variety was discovered by a West Virginia farmer at the end of the 19th century.  It is generally considered to be a seedling of Grimes Golden, to which it bears a strong resemblance.  The variety was soon taken up by the famous Stark Brothers nursery, who were so impressed by it that they bought the original tree and an area of land around it.  The tree lived on into the 1950s, by which time it had become firmly established as one of the world's great apple varieties.

Golden Delicious is now planted in all the major warm apple growing areas of the world. From a grower's perspective Golden Delicious is an attractive proposition - very easy to grow, heavy crops, and fruit which keeps in storage for a long time after harvest.

These qualities meant that by the mid-late 20th century Golden Delicious had become one of the mainstays of supermarket apple sales, along with Red Delicious and Granny Smith.  Towards the end of the 20th century when flavour once again became important in apples, detractors saw Golden Delicious as bland and boring, and it became a victim of its own success.

However enthusiasts are increasingly re-discovering Golden Delicious, and recognising that behind the mass-production and supermarket shelf-appeal there is a very good apple.  Part of the problem is that fruit picked for supermarkets is often picked when still green, and then stored for months before sale.  In contrast when allowed to ripen to a golden-green color on the tree the true flavour is revealed - exceptionally sweet and rich, almost like eating raw sugar cane.  Golden Delicious is also a versatile apple, and can be used both for dessert and cooking purposes, and it has an attractive appearance - which can indeed be golden if left to mature on the tree.

Furthermore, there is no doubting the importance of Golden Delicious in the sheer number of new varieties which have been raised from it. You do not need to be a professional grower to realise that crossing Golden Delicious with Cox's Orange Pippin (or their respective offspring) might lead to something with both the sweetness of Golden Delicious and the richness and complexity of Cox, and that is indeed what many have tried. That other supermarket staple, Gala, is a good example of this strategy.

Golden Delicious can grow well in the UK provided you have a warm and sheltered microclimate.  Our photo shows an English-grown Golden Delicious - not the perfect specimen you might see in a supermarket, but still a nice crisp sweet apple.