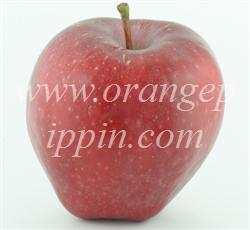 Red Delicious is one of the most famous American apples, and one of the most widely grown apple varieties. Although the names are similar, Red Delicious and Golden Delicious are entirely different varieties. There are a lot of other similarities though: both varieties were discovered in the USA at the end of the 19th century, both need warm climates, both have interesting histories, and both are basically sweet apples.

Red Delicious is "sport" of the original Delicious apple, the bright red colour making it more commercially successful, and it has become a very important commercial apple variety especially in North America.

Red Delicious is a medium-sized apple, with a tall conical shape. The dark and intense crimson colour makes it the quintessential red apple, and it is has strong shelf appeal.  A number of improved "sports" have been developed, of which the most well-known is probably Starking.

Unfortunately the visual appeal is not matched by the flavor. Red Delicious has a sweet but very mild flavor, somewhat reminscent of slightly over-ripe melon. The flesh is juicy and has a light crispness.  The skin can be quite tough.  Overall Red Delicious can be quite a refreshing apple to eat, but its chief characteristic is that it has almost no flavor at all.

Some enthusiasts also believe that in the development of more highly coloured variants, the good flavor of the original Delicious has been bred out.

Red Delicious, like Golden Delicious, is starting to decline in popularity. According to the "Washington Post", Red Delicious' share of the harvest in Washington State, one of the USA's key apple-growing regions, has fallen from 3/4qtrs to just over 1/3rd of production in the 20 years to 2003. The lack of flavour is cited as one of the factors, and in Europe (where flavor has perhaps been relatively more important to consumers), Red Delicious has never been that successful.  It is also worth noting that the vast majority of American Red Delicious production takes place in Washington State, where the cooler autumn climate contributes towards the perfect deep red finish and distinctive conical appearance.  Red Delicious grown elsewhere in the US tends not to have the same level of red colouration, forcing growers to use some of the redder sports, which in turn do not always have the conical characteristics which consumers associate with Red Delicious.

Red Delicious has been extensively used in breeding programmes because of its attractive red color and crisp flesh. It has useful growing qualities too - it is has a good reputation for resistance to fireblight and cedar apple rust.  Its most interesting modern offspring is probably Fuji. It is also a parent of Empire, which inherits some of the melon flavour. It may also be a parent of Cameo.

This variety is a sport (natural genetic mutation) of: Delicious