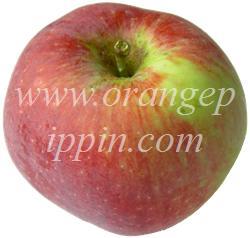 In North America deep red apples have always been popular, and Empire is a typical example of this style of apple. The colour is an intense marroon-red, overlying a light green background, and for children in particular it shouts out "eat me".

Empire was developed at Cornell University in New York state, USA in the 1940s, and its parents are classic old North American varieties - Delicious and McIntosh.  These are both shiny red apples.  It is an ideal lunch-box apple, not least because it does not bruise easily.

Empire is a sweet apple with a crisp texture and bright white flesh.  Although Empire can be stored for a short period, it is best when eaten straight from the tree. It has the characteristic and unusual McIntosh flavor, often described in apple textbooks as "vinous". Perhaps the best way to describe it is like a hint of melon or pineapple or elderflower.

Red Delicious dominates American apple production, but most of that production takes place in Washington State on the west coast.  The natural home of Empire is the north-eastern United States - where McIntosh and its offspring such as Cortland are also most at home.  Empire accounts for about 60% of the apple exports of New York State, but nationally accounts for only about 2% of American apple production - along with Idared and Jonathan. That still puts it in the top 10 American apples though, but also shows how localised the production is.  Empire has all the qualities growers look for, easy maintenance, strong well-shaped trees, attractive apples, and heavy crops - no biennial bearing here!

The McIntosh style of apple is not especially well-known in the UK, although both Empire and its close cousin Spartan are sometimes available in UK supermarkets, and Spartan is a popular and successful garden apple variety in the UK