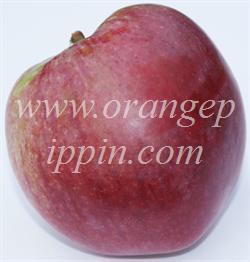 McIntosh is without doubt one of the great North American apple varieties.  Like its 19th century contemporaries Golden Delicious and Red Delicious, it has become a highly influential apple variety with numerous offspring.  However unlike those varieties its popularity has not spread outside North America, and indeed most "Mac" production, remains centred in New England and across the border in Quebec and Ontario.

The apple was discovered by a John McIntosh, a farmer in Ontario in the early 19th century, and he and his family became involved in propagating the variety.  The McIntosh apple was ideally suited to the climate of the area, being a heavy and reliable cropper with good cold hardiness.  McIntosh achieves its best flavor in colder apple-growing regions.

The McIntosh style is typified by attractive dark red or (more often) crimson colours, and a crunchy bite, often with bright white flesh. The flavor is simple and direct, generally sweet but with refreshing acidity, and usually a hint of wine - often referred to as "vinous".

In general these apples keep reasonably well in store, but the flavor falls away quite rapidly - although remaining perfectly pleasant.  Nevertheless to get the full vinous sugar rush it is best straight from the tree.

These characteristics - the crimson colour, white flesh, and vinous flavour (which fades in storage) - are invariably apparent in its numerous offspring, making this one of the easiest apple styles to identify in taste tests.  Indeed McIntosh appears to have very strong genes because its offspring are invariably crimson-colored with bright white flesh, regardless of the nature of the other parent.  As a result, telling the offspring apart is a not that easy - the distinctive Mac flavor tends to cut across the characteristics of the other parent.  (The one exception is Sunrise, an excellent apple in its own right, but with a very different flavor and a more obvious visual similarity to its other parent, Golden Delicious).

Here is an interesting photo showing several of the McIntosh family together:

McIntosh remains very popular in the north-eastern USA, and across the border in Ontario and Quebec.  However it is probably fair to say that most of its offspring are actually better apples in one way or another.  They invariably exhibit "that" flavor, often better than the Mac itself, as well as offering other attributes such as being easier to grow or storing better.  However for many Mac enthusiasts only the original will do.