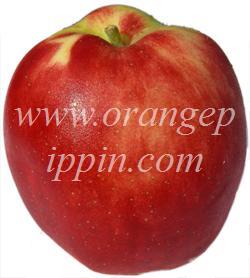 Sunrise is an attractive modern apple variety, developed in the late 20th century at the famous Summerland Research Station in Canada (home of the Spartan apple), and it is one of the best early-season apple varieties.  It's easy to guess the parentage of Sunrise: the conical shape and long stalk suggests Golden Delicious, and the strong red unblemished skin colours and bright white flesh suggest McIntosh. However it is not quite that straightforward, because there is another un-named cultivar in the mix.  Sunrise, as the name suggests, is an early apple variety - unlike Golden Delicious and McIntosh - so perhaps the other cultivar is responsible for the early ripening of Sunrise.

Confusingly there are actually two different apple varieties called "Sunrise", since the name was first applied to an English variety from the Victorian era which is now little known.  The variety described here is the modern Canadian-developed variety, and the one most widely available from tree nurseries and farm shops.

Both Golden Delicious and McIntosh apple varieties tend to be easy apples to grow in the garden - heavy cropping and not much to go wrong.  Sunrise is very much in the same vein and is therefore an ideal apple variety for the gardener who wants fresh apples in late August with minimal effort.  It is good competition for other popular early varieties such as Katy which ripens at exactly the same time, yet has a completely different parentage (Katy comes from James Grieve and Worcester Pearmain - a far more conventional early variety parentage than Sunrise).

As with all early apple varieties, flavour can be an issue, but Sunrise is undoubtedly one of the best apple varieties in this respect.  It has a fairly good sweet/sharp balance, still fairly acidic but a bit sweeter than Katy.  For such an early variety the flesh is remarkably crisp, and fairly juicy.  It benefits from being picked early in the morning when it has been cooled overnight.  It keeps for about a week in the fridge, which is better than most early varieties (and we think it is best served slightly chilled).  Another big advantage of Sunrise as an early garden apple variety is that it ripens over quite a long period, so apples can be left on the tree until you are ready to eat them.

Our photo shows a Sunrise apple picked from an espalier tree (MM106 roostock).  Since early varieties have so little time to colour-up, growing as an espalier is the best way to get a good colouration, as it exposes the fruit to the sunlight better than a conventional bush tree.  Apples that do not get full sunlight will be a very pale green colour, with patches of deep red where the sun catches them.

All in all, if you want an early apple variety to grow in the garden (and who doesn't want fresh apples in August) then you won't go wrong with Sunrise.