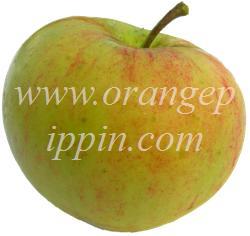 Sunset is a popular Cox-style apple, widely recommended as an alternative to Cox's Orange Pippin as it is much easier to grow.  The parentage is not known but it is almost certainly a seedling of Cox.  Disease resistance is far better, and cropping is good.  It is also self-fertile, which is fairly unusual in apples and means it can be grown without the usual requirement for a pollination partner.

Like Cox it is a mid-season variety, ripening slightly ahead of Cox - so expect to pick around mid-September in northern Europe.  Sunset does not keep especially well, and is best stored in a refrigerator, where it will last a month or so.

The main horticultural problem is that the fruit tends to be small, but this is easily corrected by thinning the fruitlets as the develop in May and June.

Visually Sunset is quite close to Cox's Orange Pippin, but often with a slightly more yellow hue to the characteristic orange flush.

Our main concern with Sunset is that the flavour can be very variable.  There is no doubt that in principle it is quite close to Cox, with similar aromatic qualities and good sweetness.  However whilst it invariably crops well in both good and bad seasons, the flavour can be very disappointing in a poor year - although even then it remains a crisp and sweet apple.  We have also had reports that flavour varies quite noticeably between M9 and MM106 rootstocks (with M9 producing a better flavour).  We therefore think its popular billing as a "Cox substitute" should be taken with caution.

However, taking it purely on its own merits, Sunset is undoubtedly a good apple for the northern European gardener, crisp, sweet-flavoured, reliable cropping, easy to grow ... and in a good year the promise of some of the aromatic flavours of Cox too.