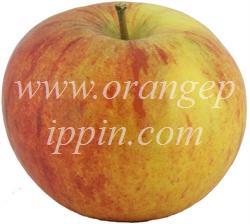 This is the classic English apple, often regarded as the finest of all dessert apples, and the inspiration for this website. It arose in England in the 19th century as a chance seedling, and has inspired apple lovers ever since. It remains unsurpassed for its richness and complexity of flavour.

Two characteristics tend to be apparent in its offspring to a greater or lesser extent. Firstly the relatively pronounced and complex "aromatic" flavour which elevates it above most other varieties. Secondly, the striking and attractive orange-red colouring.

It is the range and complexity of flavours which makes Cox's Orange Pippin so appealing to enthusiasts of the "English" style of apple. This is a variety for the connoisseur, who can delight in the appreciation of the remarkable range of subtle flavours - pear, melon, freshly-squeezed Florida orange juice, and mango are all evident in a good example.  Almost all other apples taste one-dimensional alongside a good Cox's Orange Pippin.

Although Cox is often considered  a variety to keep for a few months, we suspect this is a hangover from Victorian tradition before the invention of modern controlled atmosphere storage techniques, because it does not really keep that long.  The authorities may not agree but in our opinion it is at its best when picked fully ripe straight from the tree, or within a few weeks at most.  In this respect, Cox is not really a "late" apple variety and is perhaps better considered a late-picking mid-season variety - and some of its offspring such as Ellison's Orange are definitely mid-season varieties.

The term "orange" in the context of apple varieties commonly refers to an apple with an orange flush.  Many of these varieties such as Kidd's Orange Red, Ellison's Orange and Tydemann's Late Orange are related to Cox, but it can be applied to others such as Blenheim Orange.

Not surprisingly, Cox has been frequently used in breeding programmes, with growers seeking to marry its unique flavour with desirable characteristics from other varieties. Whilst some might argue that none of its offspring achieve the unique blend of flavours that Cox does, many of these varieties are nonetheless excellent in their own right - and to many people are more appealing than the more "serious" nature of the Cox.  We list many of these further down this page.

There are a great many variants and forms of Cox's Orange Pippin, many of which are self-fertile (a characteristic which seems prevalent in the Cox genetic make-up although the original is not self-fertile).  The self-fertile forms tend to be more widely-available from garden centres because they are easier for the gardener who just wants one tree.

Unfortunately England's greatest apple is not particularly easy to grow. It needs a relatively cool maritime climate and is also prone to diseases.

Although quite widely available in UK supermarkets, either from UK or New Zealand suppliers, in our experience these apples often have an empty flavour and can be very disappointing, given the legendary reputation of this variety. Therefore, growing your own may be the only answer, inspite of the potential difficulties. After picking, the apples can either be eaten straight away or stored in a cold dark place to allow the flavour to develop - but best eaten before Christmas.  Alternatively, Cox can often be found at farmers's markets.

Whilst the reputation of Cox's Orange Pippin is known and respected worldwide, many apple enthusiasts outside its native home in England who have tried growing it are sometimes left unimpressed with the results.  It seems that the true flavor of Cox's Orange Pippin is only achieved in the marginal cool temperate climate of England, although the climates of the Pacific North West of the USA and Canada, and Nova Scotia in eastern Canada come close.

If you live in an area with a continental climate you may be more succcessful with some of the close relatives, of which Rubinette is probably the best example.  Although still not particularly easy, Rubinette can be grown successfully in many areas of North America where Cox's Orange Pippin does not seem to work, and crucially, when you bite into a Rubinette you are coming very close to the flavor of Cox's Orange Pippin.

Flavour is a very personal thing but Cox's Orange Pippin is essential reading for anyone interested in apples, because the insight it gives into the breadth of flavor that can be achieved.  It is unquestionably the benchmark against which all others are measured, as well as being (along with Golden Delicious) one of the most influential apples for the development of other varieties.