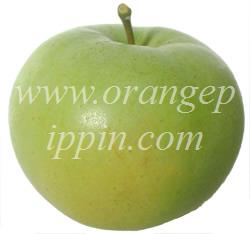 Freyberg is another apple variety developed by New Zealander J.H Kidd in the 1930s and 1940s, in his quest to combine the best characteristics of Cox's Orange Pippin and with some of the American varieties. Freyberg is a cross between Golden Delicious and Cox's Orange Pippin, and in this case it is Golden Delicious which is most apparent in the offspring.  (For a very different take on this combination, try Rubinette).

Kidd did not live to see the "birth" of Freyberg.  He died in 1945, but a collection of his trial seedlings was bequeathed to the New Zealand Department of Scientific and Industrial Research, which planted them in research orchards and raised them to bearing age.  Freyberg was one of the most promising of these, and was released in 1959.  It was named after Lord Bernard Freyberg, the Governor-General of New Zealand from 1946 to 1952.  The variety name is often mis-spelled as Freyburg.  There is more information about Freyberg's interesting life story on Wikipedia.

You would have thought that with two such excellent parents, Freyberg could not fail to be a superb apple. In fact, Freyberg is a very nice apple, but perhaps not a great one. J.H. Kidd was also responsible for two other famous varieties: Kidd's Orange Red and Gala, both of which have Cox in their make-up. Kidd's Orange Red in particular has that extra something that marks out the top quality apple, and Gala has the distinction of being one of the most commercially successful apple varieties. Freyberg somehow does not quite live up to the standards set by its cousins.

Gala is in fact a cross between Kidd's Orange Red and Golden Delicious. A comparison of Gala and Freyberg is therefore a way of looking at the effect of the richness of a Cox, applied in varying degrees on the easy-going sweet flavour of Golden Delicious.

Freyberg is very rarely available for sale, so you will have to grow your own. Like Golden Delicious (and unlike Cox) it is a reliable tree and fairly easy to grow.

Freyberg is not a great apple, but for everyday eating it is sweet and refreshing.  It is a fairly small nicely shaped golden green apple - pretty much what you would expect from a small Golden Delicious. The flesh is white and crisp but not hard. The flavour is sweet and can have a distinct flavour pear-like note to it.  In terms of flavor it is perhaps best considered a very sophisticated Golden Delicious. Like Golden Delicious it also keeps well.