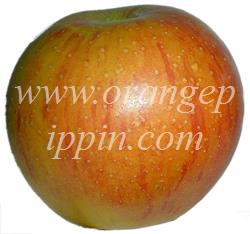 Rubinette is a modern apple variety developed in Switzerland between 1964 and 1982, and also known and trademarked as Rafzubin.  It was raised by Walter Hauenstein, a grower from Rafz (hence 'Rafzubin') in the north of Switzerland.

Hauenstein's initial intention was to produce an improved Golden Delicious, retaining that variety's excellent production and storage characteristics whilst adding more depth of flavour by cross-pollinating it with varieties such as Cox's Orange Pippin.  However things did not go to plan - instead of an improved Golden Delicious, Hauenstein's new apple turned out to be something far more remarkable.

Rubinette is moderately good-looking, with characteristic orange and dull red streaks over a light green/yellow background.  The apples are generally small to medium-sized.  Overall the appearance is attractive but in a rather subdued sort of way.

There is also a natural red sport known as Red Rubinette or Rubinette Rosso which was discovered by Jochen Hubschneider.  The red coloration is still quite dull compared to most red apple varieties, even so it is a more pleasing apple than the original.

The parentage is Golden Delicious pollinated by (probably) Cox's Orange Pippin - a very popular combination with other growers over the years.

The obvious comparison is with Freyberg, which has the same parents - Freyberg has a very different flavour and colour though, far closer to Golden Delicious, but the shape is similar to Rubinette.

Rubinette is unfortunately not easy to grow.  Like Cox it is prone to the apple disease scab.  Mild attacks do not affect the flavour but make the apples rather unsightly and this limits its commercial appeal.  The trees are quite weak and slow growing which does not help (vigorous varieties can sometimes throw off disease and pest attacks more readily).  One thing we have noticed is that the Rubinette Rosso variant seems less affected by scab, and the apples have a cleaner appearance.

The apples also tend to be very small, although the size can improve as the tree gets older - and as noted below, ruthless thinning in late spring will increase the size of the remaining fruits.  These horticultural difficulties mean that Rubinette is not widely grown - it is grown commercially on a small scale in Europe and a few North American growers have also taken it up.  As a result, it is difficult (but not impossible) to find Rubinette apples on sale.

Growing your own tree may therefore be the best option, albeit a frustrating experience in some years.  Although developed (like most modern varieties) to work with the popular commercial dwarf M9 rootstock, for garden use, we recommend you try the more vigorous MM106 rootstock.  This rootstock suits the weak growth habit better, and also gives you more training opportunities - including espalier forms, which can be easier to monitor in a garden environment for the inevitable scab, mildew, and aphid attacks, as well as giving potentially better fruit quality.  We have also heard some unsubstantiated reports that fruit size is better on MM106 for this variety (for most varieties M9 gives larger fruit size than MM106).  Rubinette really benefits from a spray programme (conventional or organic) and if you go the un-treated route then you are going to have to accept lesser quality - although it is worth persevering (our own Rubinette trees are un-treated).

There is some good news though: whilst it is quite difficult to grow clean examples, we have almost never had a bad Rubinette - so if you can get the tree to actually produce a crop, you can rely on the flavour to be consistent.  This is not like Cox, where the flavour can vary considerably from year to year.  Another point in its favour is that Rubinette has a wider climate range than Cox's Orange Pippin, and is therefore a better choice for gardeners in much of the USA where summer temperatures are too high for Cox.

We have received some horticultural information from Promo-Fruit, the originators of Rubinette (see www.promo-fruit.ch).  They recommend that it is important to ensure that the fruit is heavily thinned.  Allow no more than 1 fruit per set of blossoms, and make sure you remove the central fruit in the cluster (which tends to be the biggest, known as the 'king' fruit).  From our own experience we think this is good advice - be ruthless with the thinning, and you will be rewarded with at least a few apples of good medium size.  If you don't thin, the apples will be too small.

So, a moderately attractive small apple that is not that particularly easy to grow and needs a lot of thinning ... why bother?  Well, very simply, this apple has a superb flavour.  Regardless of the contribution from Golden Delicious, there is no doubt that Rubinette is a Cox-style apple through and through.  It is intense and honeyed, with echoes of pear-drops, simultaneously sweet and sharp. Of all the Cox offspring, Rubinette surely gets closest to having that elusive greatness - and many would argue it is even better than Cox.  Interestingly, although the addition of the sweetness of Golden Delicious might be expected to make Rubinette sweeter than Cox, somehow this has not happened, and if anything Rubinette is slightly sharper than Cox - but the sweetness from the Golden Delicious gives a richness to the sharpness.  We have speculated that perhaps it is the rich influence of the parent of Golden Delicious - Grimes Golden - that has somehow been carried over into Rubinette.  Whatever the cause, the balance of sweet and sharp in Rubinette is probably the best of any apple variety.