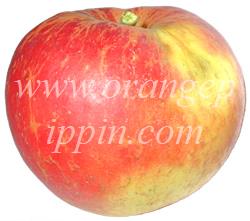 Kidd's Orange Red is named after James Hutton Kidd, an orchard owner living in New Zealand in the early 20th century who had a passion for raising new varieties. Kidd might have been living in the New World, but he was clearly a fan of the complex aromatic flavours of the "English" style of apple. Like many before and since, he experimented with crossing Cox's Orange Pippin, the temperamental but definitive English apple variety. In Kidd's Orange Red he achieved that something special which marks the great from the ordinary, and set a benchmark that has rarely been matched - this is undoubtedly one of the most outstanding "English" style apples available.

The skin colour is yellow but with an extensive orange-red flush. The irregular light patches of russet give it a strongly marbled appearance - more interesting to look at than the super-smooth glossy red skins of the more modern varieties. As it ripens Kidd's Orange Red sometimes has a distinctive pink blush, but by the time it is ready to pick this has usually disappeared. The shape is slightly flattened and can be somewhat lumpy.

The visual appeal is matched by the taste. The skin is thin and the flesh is a light yellow-cream colour, and quite dense. It bites cleanly, but is firm rather than crunchy. The flavour is sweet and honeyed, noticeably sweeter than Cox's Orange Pippin. The aromatic complexity of its parent is still there, but rich sweetness is the predominant impression. Like many "English" style apples it is also pleasantly chewy, and each bite seems to release yet more juice and flavour. It's in some ways reminiscent of a good French dessert wine - sweet, but with a good kick to it.

Kidd's Orange Red's other parent is Delicious a seedling variety found in the USA in the 1870s (not to be confused with Golden Delicious) and by Kidd's time already a major commercial apple variety, and therefore a natural choice for experimentation. This is where Kidd's Orange Red gets its sweetness from.

Kidd's Orange Red is a late season variety, ripening around mid-October in the northern hemisphere. It is best eaten before the New Year.

Kidd's Orange Red is often available from farmers' markets but has never really achieved commercial success because it does not crop especially heavily.  However it is a good choice for the gardener because it is easier to grow than Cox's Orange Pippin, and unlike Delicious can also be grown in more temperate climates.  Once the tree comes into bearing it tends to be a fairly reliable if unspectacular cropper.  Cropping can be improved by gently bending branches towards the horizontal and then tying them into position when they are still young and pliable - left un-trained Kidd's Orange Red trees tend to put out long vertical branches which are less fruitful.

Kidd developed several other apples, the most famous being Gala.  More details on the life of James Hutton Kidd.

If you are looking for a top quality apple tree for the garden, Kidd's Orange Red deserves serious consideration.