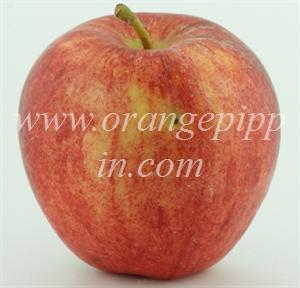 One of the most widely grown apple varieties in the world, and a mainstay of the supermarket apple selection - not least because it is available year round from northern and southern hemisphere suppliers.  One of the unique features of Gala is that it can be grown with good quality results in both temperate and warm apple-growing regions, and it is generally regarded as a low-chill variety (i.e. it can be grown in regions which experience less than 800 hours of cool winter temperatures a year).

Gala is a cross between Kidd's Orange Red and Golden Delicious - a highly promising start.  Bearing in mind that Kidd's Orange Red is the offspring of Cox's Orange Pippin and (Red) Delicious, Gala is effectively a union of three of the world's most important and distinctive apple varieties.  Perhaps the flavor does not quite live up to that promise, but this is still a high quality apple with the potential to deliver really good flavor, particularly when home grown.

The colouration of Gala is exactly as you would expect from a cross between a Cox-type variety (Cox is one of the parents of Kidd's Orange Red) and Golden Delicious. It starts out as a very light coloured Cox, mainly orange streaks over yellow; mature apples are much darker, often a strong red colour. (The colour is a good indicator in supermarket Galas of the age of the apple: if it is very pale then it is probably the new season's crop, probably picked slightly early; if it is very dark then either it has been left deliberately on the tree to mature or it has matured over a long period in a cold store).

Because Gala is so widely grown, and keeps well in storage, it is not unusual around April/May and September/October to see Gala apples for sale from both northern and southern hemisphere suppliers at the same time - with one having spent roughly six months in storage. In the UK and USA, make sure you are buying southern hemisphere Galas after April, and northern hemisphere after September. We reckon that Galas from South Africa and New Zealand seem to taste fresher and crisper than those from Brazil. From the northern hemisphere, French ones are generally better than UK or Italian ones.  However in both cases it is largely a matter of luck, and regardless of the source, Galas are generally pleasant and un-demanding to eat.

Given its commercial importance, a number of sports have been developed - mutations of the original variety with slightly different qualities (usually better colouration).  The following varieties are all sports or tradenames of Gala: Annaglo, Galaxy, Regala, Tenroy, Mondial Gala, Royal Gala.

Apple purists tend to dismiss supermarket varieties like Gala as bland and boring, often with good reason. However it has to be said that if you want a reliable sweet easy-eating apple, Gala is actually hard to beat. It is also important to compare "apples with apples" - a locally-picked specialist variety in a farmers market is inevitably going to taste better than a supermarket Gala which has travelled from another country. However, anyone fortunate enough to have tried a Gala straight from the tree will know that it has a surprisingly punchy sweet flavour, not found in supermarket specimens.  In freshly-picked examples the sweetness typical of Gala has a pear-like quality - which is perhaps more fully expressed in one of its offspring, Jazz.

At the end of the day, whilst there are undoubtedly many better varieties around, none of them are so readily available !

Our headline photo shows a tree-ripened Gala grown in the south of England.  Note that it is a deeper red than some shop-bought Galas, and the resemblance to Kidd's Orange Red is quite noticeable in this particular example.