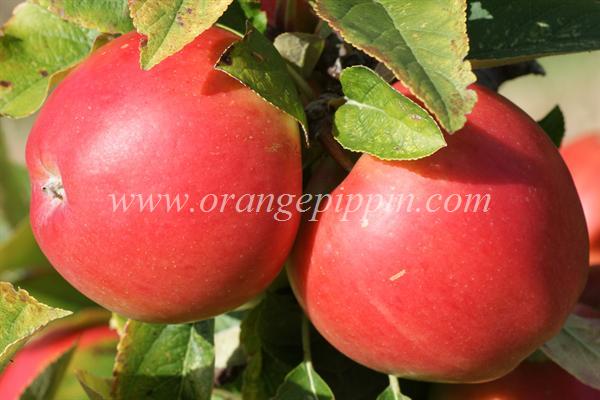 Part of the appeal of the old heritage apple varieties is their good honest names. In the "good old days" apples were named without fuss. A common strategy was the name of the person who discovered them - Pott’s Seedling, Cox’s Orange Pippin, Kidd’s Orange Red, Granny Smith, Chivers Delight and so on. If that didn’t have quite the right ring to it, the name of the local village might suffice: Ribston Pippin, Barnack Beauty, Allington Pippin, Braeburn. Another popular strategy was to borrow the name of a famous person such as Lord Lambourne, Freyberg, Bismarck for example. If you were stuck (or not very inventive) you just went for something really simple like Red Delicious or Golden Delicious. In the 21st century hower the important job of naming (or branding) new apple varieties is no longer left to the happy grower, but has been taken over by marketing departments, who see apples as just another consumer item, and might as well be naming a new car as a new apple. Thus we have Kanzi, a brand new 21st century apple, whose name is supposedly (loosely) derived from the Swahili for "hidden treasure" - of course.

Kanzi, as a name, does not perhaps have the same gravitas as the old heritage apple varieties - yet. Fortunately this is a pretty good apple so we can let the name grow on us. Kanzi has been developed and marketed by Greenstar Kanzi Europe (GKE) and first came on to the market in 2006. It’s not available from US growers yet, and most supplies are from the Netherlands.

The Kanzi apple ticks all the right boxes for a modern apple. It has the modern bi-coloured appearance, and does indeed look very attractive on the supermarket shelf. The marketing literature suggests that Kanzi is a crimson-red but all the examples we have seen are red-orange. It is a good firm fairly crisp apple, with a mild but pleasant apple flavour, slightly sharp rather than sweet and quite juicy.

The obvious comparison is with Jazz. Although Jazz was developed independently in New Zealand and has been available in supermarkets for a few years, it is actually a sibling of Kanzi – they share the same parents, Gala and Braeburn. We have done a number of comparative tastings of these two important new apples and it is difficult to say which is "best" - they are both very good examples of 21st century apple development. Anyone who thinks that only the old heritage apple varieties have any flavour will have to think again with either of these apple varieties. It is true that apple development went through a bit of a bad patch in the mid 20th century, with supermarkets putting supply chain attributes ahead of flavour, but there can be no doubt that modern apples like Jazz and Kanzi are right up there with the old classic apple varieties when it comes to flavour.

The colouration is very similar, but we think Kanzi is arguably the prettier apple. Jazz can look a little bit too tall, whereas Kanzi is more rounded -quite similar to Ariane (although the parentage is completely different).

Looks are important commercially, but for us it is mainly about the flavour of the apple. The flavour of both Kanzi and Jazz is extremely good, but also quite different. The Jazz apple has the stronger flavour, with its distinctive peardrop aftertaste and dense flesh. Kanzi is more delicate, with a less pronounced flavour and lighter flesh. In our tests so far most tasters prefer Kanzi (by a margin of at least 2/3rds to 1/3rd), partly because Jazz can be just a bit too solid to bite into sometimes. The milder flavour of Kanzi is also easier and less demanding, although perhaps a bit less memorable too. However your objective author should here state his own preference: Jazz wins because of its more distinctive flavour.

Kanzi is grown commericially in Europe, particularly the Netherlands, where it is one of the most widely-grown varieties (along with Elstar).

The photo below shows Jazz (left) and Kanzi (right) apples side by side.