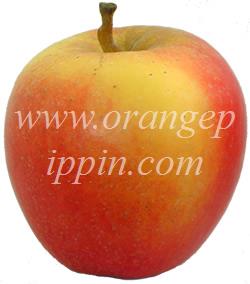 There is a widely-held view that only the old heritage apples have real flavor, and that new mass-market varieties aimed at filling supermarket shelves are tasteless.  There is perhaps some truth in this, but as consumers increasingly look for flavor in their shopping baskets, growers have begun to respond by developing varieties where it is more prominent than it used to be in the previous generation of supermarket apples.

Jazz provides the best evidence yet that modern apple development is pulling ahead of the traditional heirloom varieties.  Jazz is a crisp hard apple with an excellent strong sweet-sharp flavor, and a pronounced fruity pear-drop note.  The flavor undoubtedly puts it in the first rank of apples, and it is hard to think of a traditional variety that can compete with it.

Jazz  was developed in New Zealand in the 1980s. It is a cross between two other major apple varieties - Braeburn and Gala. However the distinctive floral peardrop note which is so characteristic of Jazz is not that obvious in either of its immediate parents, and perhaps harks back to the original Delicious, one of its great grand parents (via Gala and Kidd's Orange Red). Jazz apples often have an upright  elongated shape which is also somewhat reminscent of Delicious. Two other very significant ancestors are Cox and Golden Delicious. Whatever the genetic mix, the result is a great and unique apple.

The butter-yellow flesh is juicy, crisp and dense.  Indeed perhaps the one drawback of Jazz is that it is a very solid apple, and may be a bit difficult to bite into if you do not have strong teeth - the solution is to cut it into slices first.

We have been advised by Steve T of New Zealand that the red colour is key to the unique Jazz flavour - poorly-coloured apples will taste like Braeburns.  From our own tests we would tend to agree with this.

Jazz is actually a trademark, and the true cultivar name is Scifresh.

Jazz is grown in New Zealand, France, and Washington state in the USA, with most commercial plantings starting in 2000. Like a number of modern varieties it is trade-marked, and was developed in conjunction with a marketing agency - Enzafruit - which controls planting and marketing internationally.

Jazz tends to become available towards the end of the season - so in northern Europe and North America locally grown fruit comes into shops in November/December whilst southern hemisphere apples will be available in May.  A more deeply-colored sport called Southfield has been found, which ripens a bit earlier.

The appearance and keeping qualities are very good, and in our opinion it has by far the best flavour of all the mainstream apple varieties - indeed it is the only supermarket apple variety which makes it into our Top 10 Apple Varieties.