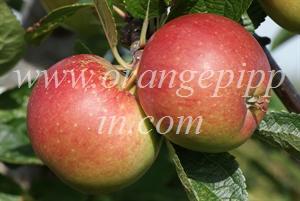 Braeburn is one of the most important commercial apple varieties.  It originated in New Zealand in the 1950s, and by the last decades of the 20th century had been planted in all the major warm apple-growing regions of the world.  Braeburn accounts for 40% of the entire apple production of New Zealand.  Even in conservative Washington state, the most important apple-producing area of the USA, where Red Delicious and Golden Delicious have always held sway, Braeburn is now in the top 5 varieties produced.

The reasons for this success are not difficult to pinpoint.  Braeburn has all the necessary criteria for large-scale production: it is fairly easy to grow, produces heavily and early in the life of the tree, it stores well, and withstands the handling demands of international supply chains.  What marks it out from the competition is flavour.  Braeburn was the first modern apple variety in large-scale production where the flavour was genuinely on a par with the older classic apple varieties.  Braeburn's depth of flavour makes its main competition - Red Delicious and Golden Delicious - seem one-dimensional in comparison.  At a time when consumers were starting to look for something less bland in their weekly shopping, Braeburn was the right apple at the right time.

The commercial success of Braeburn has opened the way for the development of many new apple varieties where flavour is now one of the main selection criteria.  Braeburn was one of the first "bi-coloured" varieties, a characteristic now regarded as essential for sales success.  In comparison the first wave of supermarket apple varieties were either bright red (Red Delicious) or shades of solid green (Golden Delicious and Granny Smith).

This combination of modern colouring and flavour means that Braeburn was effectively the first of the new-wave of modern apple varieties.

The first Braeburn tree was discovered growing in New Zealand in the 1950s, and is named after Braeburn Orchards, where it was first grown commercially.  It is generally thought to be a seedling of a variety called Lady Hamilton.   The other parent is not known, but is popularly believed to be Granny Smith - quite possible given the time and location of its discovery, but there seems to be no scientific evidence to confirm this theory.

When conditions are right there is no doubt that Braeburn is a first-class dessert apple.  It easily outstrips its late 20th century peer group (Golden Delicious, Granny Smith, Red Delicious) with a richness and complexity of flavour that they cannot match.  In fact in many ways Braeburn is now the benchmark apple variety against which all other commercial varieties should be ranked.  It is crisp, without being hard, and very juicy. It snaps cleanly to the bite, and there is an immediate rush of strong apple flavours.  The overall flavour is sharp and refreshing but with a good balance of sweetness - and never sugary.  There is occasionally a hint of pear-drops to the flavour of a new-season Braeburn (a characteristic which is more prominent in its offspring Jazz).  Braeburn is at its best when cooled slightly below room temperature, and if you get a good one it really reminds you why you like eating apples.

If there is a downside to Braeburn, it is probably poor quality control.  Braeburn is grown throughout the warm apple-growing regions of the world, and it also keeps well in storage.  As a result there can be quite a variation in quality and flavour of Braeburn apples reaching the consumer from different countries and at different times of the year.  Since Braeburn is too old to be trade-marked, there is little control over the "brand" - quite a contrast with the rigourously-controlled production of Pink Lady for example.  Of the southern hemisphere producers, we think Braeburns from Chile are often good - at their best in June.  Braeburn is also widely grown in Europe, and France seems to have the best climate for producing good ones - try them in November.

A number of sports of the original Braeburn have been developed, including: Hidala, Mahana Red, Royal Braeburn, Hillwell, and Southern Rose.

Braeburn's other weakness is that whilst it is not difficult to grow, it is difficult to grow in an organic regime - although this is also true of most of its competitors.  Apple varieties which have been developed for disease resistance and therefore more amenable to organic production such as Topaz - in many ways quite similar to Braeburn - have not achieved the same commercial success.

Braeburn stores very well, and apples for cold store are generally picked whilst still slightly immature.  Whilst some apples improve in store, Braeburn is arguably at its best soon after picking.  Some growers and supermarkets offer premium tree-ripened Braeburns from time to time and these are worth trying.  They are likely to have more red and less green colouring than conventionally stored apples.

Braeburn is grown commercially in the southern UK, but it really needs a warmer climate and longer growing-season than is usually possible here.  According to UK government DEFRA statistics, in July 1994 there were about 194 hectares of Braeburn orchards in the UK - compared with 669 hectares for Gala and more than 3,000 hectares for Cox.  Even early varieties with little shelf-life such as Discovery (300 hectares) and Worcester Pearmain (213 hectares) are grown more extensively than Braeburn.  Whilst UK supermarkets are under some pressure to source apples from within the UK, it is perhaps questionable whether growing varieties like Braeburn, which are not really suited to the UK climate, is the best solution.  However, to partly contradict this view, another view is that the marginal UK climate can actually produce better flavour in an apple compared to ones grown in more temperate European climates (notably France or Italy).  On balance we think the main problem with UK-grown Braeburn is not so much the lack of sunlight, but the shorter growing season.

Braeburn is a relatively easy variety for the backyard orchardist.  It likes a warm but not hot climate.  It can be grown successfully in the southern UK, and most parts of the USA.

In the 21st century Braeburn faces competition as supermarkets start to offer a much wider choice of apple varieties - not least from one of its own offspring, Jazz (a cross between Braeburn with pollen from Gala).  Compared to the last decades of the 20th century when just a few apple varieties dominated world production, the market is now much more diverse.  However when properly grown and marketed Braeburn is such a good apple variety that it is likely to remain one of the leading varieties for many years to come.