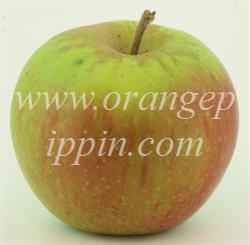 Braddick's Nonpareil is a relatively unknown but remarkably good English dessert apple.  Rated by Hogg in his late 19th century 'The Fruit Manual' as "excellent", it is nevertheless quite a shock to anyone brought up on modern sweet dessert apples.  Braddick's Nonpareil hits you with an intense dense sharpness which can be eye-watering when just picked, although it sweetens in storage (and this is a good variety to store for the winter).

Crucially however, this sharpness is not simply acidic sourness (as you find in a cooking apple or a Granny Smith), but has a real depth and richness to it which is extremely satisfying.  After a few mouthfuls, you start to realise that actually there is a background of sweetness in Braddick's Nonpareil that fills out the sharp tanginess into something that few other sharp-flavoured apples can attain.

The variety was raised by Mr John Braddick in England at the very start of the 19th century, and nothing is known of its origins.  Hogg recommends it for espalier training and reports that it crops reliably.