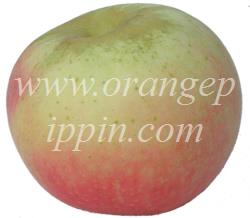 Discovery is one of the most popular English early apples. It is grown commercially on a small scale in the UK, because unlike almost all other early apple varieties it has a reasonable shelf-life - perhaps a week or so. It is quite widely available in the UK in late August and early September.

Discovery is a bit like Beaujolais Noveau - its appeal is entirely down to being fresh and new. Neither does the flavour stand much comparison with later season varieties. However, it is a change from imported apples when it comes into season, and nice when served slightly chilled from the fridge. As you might expect, the flavour is acidic rather than sweet and has little depth to it. Interestingly, just like Beaujolais, Discovery can have a hint of strawberry flavour, although this is very variable. The colours are a fresh yellow-green, usually with dark red patches where the sun has caught it.

Discovery is a very important apple for commercial growers and supermarkets in the UK because it allows them to start marketing the new English apple season, and get consumers primed to buy English apples again.  However there has been increasing debate within the industry about what many insiders see as a poor-quality apple, and concern that consumers may be turned-off English apples at the start of the season if the flavour does not match expectations.  The problem is that the shelf-life is very short, so if the crop is not picked at exactly the right time it will be either under-ripe or past its best - in this respect it is more like a soft fruit than an apple.  As it stands the UK industry has to rely on Discovery at this time of the year but if an alternative early-season variety could be found it is likely that Discovery would rapidly fall out of favour as a commercial apple variety.

Discovery is often thought of as an old variety, but was found in the late 1940s by a fruit farm worker in Langham, Essex, who planted some pips of Worcester Pearmain in his garden.   Discovery is therefore a seedling of Worcester Pearmain, a 19th century early-season apple variety which lends its attractive red finish. Worcester Pearmain is probably the source of the strawberry flavour, which is also found in some of its other offspring including Katy, which is similar in appearance to Discovery but has a bit more depth of flavour and arrives slightly later in the season.  Scrumptious, a modern early variety, is also closely related.

An interesting characteristic of Discovery is that the red skin colour can occasionally bleed slightly into the flesh.  There are some sports where this red-fleshed characteristic is more pronounced.

Discovery is a good apple tree for the garden, being fairly easy to grow. Having your own tree also means that you can enjoy the apples at their best, which is often not the case with shop-bought examples.