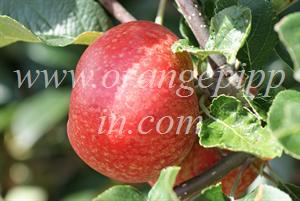 Beauty of Bath is an attractive early-season English apple, hailing from the Victorian era.  It will ripen in mid-July in southern England.

Beauty of Bath was grown commercially in Victorian times because it was one of the earliest-ripening varieties then available, and it is a heavy-cropper with good disease resistance.  There is no commercial demand for this type of apple today because the market for apples in early summer in the northern hemisphere is dominated by high quality late-season varieties imported from the southern hemisphere.  Late season apples store and handle much better than early season varieties.  Indeed Beauty of Bath is best eaten straight from the tree, as it does not keep more than a day or so.  Although the flavour does not compare with later season apples, Beauty of Bath would have been a welcome sight in early August for the Victorian apple enthusiast, as the first sign of the new apple season.  Like most early varieties it is primarily quite a sharp flavour, but can be sweet if you catch it before it becomes over-ripe.

Beauty of Bath remains a popular garden apple variety in England, although somewhat eclipsed by the later summer apples such as Worcester Pearmain and Discovery.