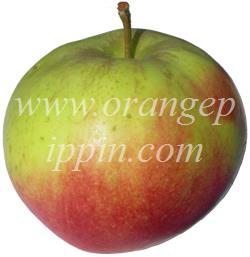 Worcester Pearmain is an early season English apple, originating from Worcester in the 1870s.

Worcester Pearmain has been a relatively popular apple from the start, and is still grown commercially on a small scale in England.  The apples come into season a few weeks after Discovery, and it is relatively easy to find for a short period in mid-September in supermarkets and farmers markets.

Worcester Pearmain's main claim to fame is the strawberry flavour, although the intensity of this is quite variable.  As with any early variety, the flavour is very dependent on the weather during the short period that the apples ripen.  The parentage of Worcester Pearmain is unknown but a likely candidate is Devonshire Quarrenden - which also has the strawberry flavour.

Although it cannot  be regarded as being in the first rank of apple varieties, Worcester Pearmain has been used as the basis for a surprisingly large number of breeding programmes.  The early ripening period and the strawberry flavour are the main reasons for this, with growers hoping to introduce this dimension into new varieties.  The intense red/crimson flush is another commercially valuable characteristic.  It has to be said that many of these varieties are a considerable improvement over Worcester Pearmain.  Discovery is perhaps the most well-known, but Elton Beauty, Katy, Jester, and Lord Lambourne all inherit the strawberry flavour to some extent.

Worcester Pearmain makes a good apple tree for the garden, and the flavour really benefits if the apples are left on the tree as long as possible.  However, some of its offspring are also good varieties for the garden - Katy for example.