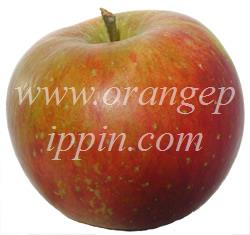 Lord Lambourne was introduced in 1907 and is very much in the tradition of classic English high-quality dessert apples. It has the pleasing uniform shape - round, and not too flattened - and typical orange flush over green, with a hint of russet. On biting into a Lord Lambourne the first thing that strikes you is the juice and acidity. The flesh is creamy-white and quite crisp, and the flavour is pleasantly strong.

It is a fair bet that such a high-quality aromatic apple will have Cox's Orange Pippin somewhere in its ancestry but the link is not certain. The immediate parentage is James Grieve and Worcester Pearmain, and the parentage of James Grieve is not known although Cox is a contender. If so, then the aromatic flavour of Cox is rather more apparent in Lord Lambourne than in James Grieve, although the James Grieve acidity is still prominent.

Another interesting comparison is with Topaz, a very modern variety and distantly related to Lord Lambourne. Topaz arrives much later in the season but like Lord Lambourne it has some of the classic English aromatic flavour, overlaid with plenty of juicy acidity. Despite being developed nearly a century apart, both these varieties are (arguably) much better apples than their common ancestor James Grieve.

Like many of the James Grieve offspring, Lord Lambourne is an easy apple variety to grow in the garden, and produces good crops.  It is also (like Katy) fairly easy to find in the UK at farmers markets, and occasionally in supermarkets.

Lord Lambourne is, along with Ellisons Orange, one of the earliest of the aromatic English-style apples, and whilst it does not have the complexity of the later-arriving varieties it is nonetheless a pleasing apple in its own right.