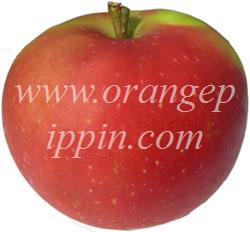 James Grieve is a justifiably popular dual-purpose apple variety, raised in Scotland at the end of the 19th century, the height of the Victorian period of apple development in the UK.  James Grieve is a mid-season variety that is picked in early-mid September.  At this stage it is pleasantly acidic and refreshing and if it is too sharp for eating it can be used for cooking (cut it into small chunks, it keeps its shape when cooked).  After a few weeks the flavour sweetens and becomes quite mild, and it is then an excellent apple to eat in slices along with a cheese course.  The flesh is soft, somewhat like a firm pear in texture.

Our photo shows a 'sport' known as Red James Grieve which was discovered in the 1920s.  This is a natural genetic mutation of James Grieve - the shape and size are identical to the parent James Grieve but the red flush is more solid.  There are a number of sports of James Grieve, a reflection of how widely it has been grown and the commercial interest shown in the variety in the early part of the 20th century.  The photo also makes clear that James Grieve is a very handsome apple, and the skin has a slight satin sheen to it.

James Grieve has been used as the basis of a number of newer varieties, some of which have become successful as garden apple trees or in small-scale commercial plantings.  One reason why you might want to use James Grieve in a new variety breeding programme is that it invariably passes on its inherent acidity, which can be an excellent way to stiffen the flavour of a new variety whose other parentage is sweet or bland.  Varieties such as Greensleeves, Lord Lambourne, Elton Beauty, and Katy all inherit the acid kick from James Grieve which helps make them so refreshing.  Lord Lambourne has also in turn proved popular in breeding programmes so James Grieve is one of a relatively small number of varieties which has 'grand-children'  - Topaz is probably the most well-known of these.  Like James Grieve these are all early to mid-season varieties.

Another important James Grieve characteristic is its juiciness - bite into one and the flesh glistens with juice.  This makes it a great apple variety if you want to make your own apple juice - a feature also inherited by Katy.

Interestingly the parentage of James Grieve itself has not been fully established.  Cox's Orange Pippin is a possible candidate, as it was a popular apple for amateur breeders at the time (as it still is).  James Grieve has a very similar shape, which is a good indication, but it appears to have none of the aromatic sweetness of Cox.  This is not necessarily a reason to reject Cox as a parent, since we do not know the other parent, and Ribston Pippin (the likely parent of Cox) has a robust flavour which is not dissimilar to James Grieve.  The other possible candidate is Pott's Seedling, a popular commercial cooking apple of the period.