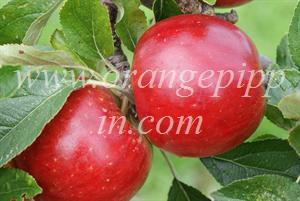 Meridian is another great example of modern English apple development from the famous East Malling Research Station. It was developed during the 1970s and released in 2000. It has all the characteristics which we like about modern apples: clean-looking and tasting, easy-going, consistent quality, and gives you an instant hit of juice and flavour.

Meridian is a cross between another modern variety, Falstaff, and Cox's Orange Pippin. Students of apple geneology will note that Falstaff is itself related to Cox so you might expect this to be a very complex and aromatic apple. However Falstaff is in some respects more like its other parent, James Grieve, and Meridian seems to have also inherited these characteristics - notably its juiciness. The juice bursts out of every pore when you bite into it. The flavour is well-balanced but not especially complex.

We have been told that the Cox-like characteristics are more apparent if the apple is left on the tree longer. It seems that Meridian is a particularly difficult variety in which to guage ripeness, and at one time was going to be marketed as an early Cox-style variety. We think it is fair to say that Meridian is reminscent of Cox's Orange Pippin but we don't think it has the same depth of flavour. The flavour is more delicate, rather like a tarte aux citron, there is a hint of lemon or melon.  This delicacy is no bad thing, and Meridian is one of the best modern UK-developed apple varieties.