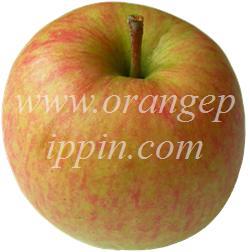 In apple terms Falstaff is brand-new - it was developed in Kent in the 1980s. For modern growers appearance is of great importance, and there is no doubt that Falstaff is a very attractive apple, reasonably large in size and with a lovely red flush over a golden yellow background.

Falstaff is another variation on a familiar modern theme - growers attempting to improve on Golden Delicious. Whilst Falstaff probably owes its size and yellow background colour to Golden Delicious, when it comes to flavour it really takes after its other parent - James Grieve, a juicy and pleasantly acidic apple which arose in Scotland in the 1890s.

There is also a red sport - Red Falstaff - which has identical characteristics apart from the colour which is a more attractive and pronounced shade of red.

Falstaff is crunchy and juicy straight from the tree, with light cream coloured flesh. It mellows and softens somewhat as it ages, but remains juicy. The flavour lacks the complexity of the Victorian apples, but is nevertheless a very well-balanced combination of sweetness - from Golden Delicious - and acidity - from James Grieve. We tend to find that the James Grieve parentage probably has the greater impact on Falstaff's flavour, and it is pleasingly sharp when picked from the tree (which is actually the best way to enjoy it). There is something in the flavour for fans of the older classic English style as well - it is quite likely that one of its grandparents is Cox's Orange Pippin.

Like many James Grieve offspring, this is also a good apple for making your own apple juice.

As a variety for the garden Falstaff and Red Falstaff are amongst the best.  The quantity and quality of apples produced is matched only by the lack of effort required - even the most hopeless gardener should be successful with this variety.  It does have a slight susceptibility to scab, but this is rarely a problem.  In our experience this is also an apple which almost everyone really enjoys, from the conoisseur to those who profess not to like apples - it does everything you expect an apple to do.