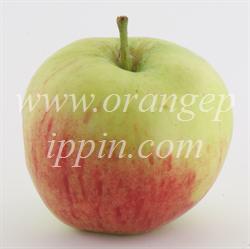 Fameuse is a fairly small bright red/crimson apple with bright white flesh and a distinctive sweet flavor.  It originates from the area of Quebec in Canada, and is able to tolerate extreme winter cold.  It was grown commercially in Quebec on a large scale. It has good disease resistance with the exception of being highly susceptible to scab.

Fameuse is historically a very interesting apple, since it is probably the ancestor of McIntosh, which in turn has led to many other varieties - all characterised by the crimson skin colors and sweet white flesh and unique vinous / sweet flavor.

We are grateful to Canadian apple enthusiast Eric Rivard for finding the following details about Fameuse.

Summary of some information translated from "Le journal d'agriculture illustre" 1889, in QUEBEC Province.  From mid 1700 to 1850 Fameuse was the main grown tree and the fruits were exported to England in large quantities. For some reason, was a massive destruction of the Fameuse apple trees in Quebec Orchards in +/- 1860’s with the introductions of new varieties such as the Wealthy, the Baldwin, and other species from Russia.  A new disease in +/-1885  "Apple scab" or “Fusicladium dentrilicum” caused the end of the last commercial Fameuse orchards.

- Not very sensitive to diseases

- Consumption: From the Crop till the end of December (1800 century  literature seems to mention February)

- Rusticity does not fear frost.

- Uneven size and colour in the same tree

- Can find all red and red/green streaked apples and this on the same tree.

What about the quality of the Fameuse Apple? I like the Early Astracan, I taste the Duchess beautiful, I enjoy the Soft Peach, I admire the huge Alexander. But I remain without expressions when I eat a Fameuse apple in our happy winter evenings. Is there a most succulent, most tasty; with a richer taste and more flavourful? In one word, is the Fameuse, no species will equal it in quality, argue its glorious title; Admittedly it has certainly not stolen it's picturesque name.