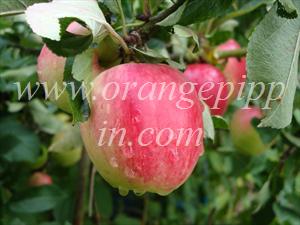 Katy is an attractive medium-sized apple, usually bright red in colour over a light green yellow background.  The flesh is a pale cream colour, and on the softer side of crunchy.  Katy is usually a very juicy, and when fresh from the tree the juice goes everywhere as you bite into it. It has a fairly mild apple flavour, a bit of refreshing acidity, and in a good year a hint of strawberry.  The flavour is perhaps not the greatest, but certainly very pleasant.  If you have a surplus (and with Katy you generally do have a surplus), then Katy is an especially good apple for juicing - the juice is a lovely red/orange colour - similar to pink grapefruit juice in colour.

Katy is an easy-going early-season apple. The pretty appearance and juicy flavour mean it is popular with children, and it becomes available just in time for lunch-boxes for the new school term.  As well as being easy to eat, it is also one of the easiest apple varieties to grow - very productive, and trouble-free.  An extra bonus for gardeners is that Katy produces a lot of blossom over a long-period, so is very useful to aid in pollinating other apple varieties.

Katy originates from Sweden, where it is known as Katya, and as such is well-suited to growing in cool temperate climates. It was developed in 1947 as a cross between James Grieve and Worcester Pearmain and is very much a mixture of these two varieties. Worcester Pearmain is an English early-season variety from the 19th century, which used to be quite widely grown. Its most recognisable trait is a subtle strawberry flavour, and this is also sometimes present in Katy. James Grieve is another early-season variety, and its most notable characteristic is lots and lots of acidic juice.  As an early-season variety, Katy is one of the best apple varieties for northern temperate growing areas with shorter growing areas, since it will ripen even in a poor summer.

For an interesting tasting exercise, see if you can find Elton Beauty or Lord Lambourne - like Katy, these are both crosses between James Grieve and Worcester Pearmain.

Katy is available for a few weeks in late August and early September. Like most early varieties it is very refreshing when straight from the tree, but goes soft after a while - best kept in a refrigerator and nice to eat when cool rather than at room temperature.  Fortunately the apples keep nicely on the tree and can be picked over a period of about 2-3 weeks.

Although usually regarded as a dessert apple, thanks to its inherent acidity Katy is also a useful culinary apple - try it as the basis of apple crumble or tarte tatin.  It breaks down into soft chunks during cooking, with a good sweet/sharp flavour.

In summary, Katy is a really excellent apple for gardeners in temperate climates.  It produces an attractive neat tree, very easy to grow, and highly productive, and the fruit can be eaten fresh or juiced or even used for cooking.