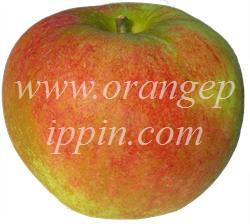 Karmijn de Sonnaville was raised by Piet de Sonnaville, an apple enthusiast who had prevoiusly worked at the well-respected horticultural research school of the University of Wageningen in the Netherlands.  Starting in 1949 he created numerous crosses, primarily using Cox and Jonathan, along with many others.

Karmijn de Sonnaville is his most well-known creation, a Cox-style variety, but with a distinctly more pronounced aromatic flavor.  Cox's Orange Pippin is the female parent and the pollen parent is Jonathan. It is a triploid variety, and not able to pollinate other apple varieties.

Despite the English Cox ancestry, Karmijn de Sonnaville grows best in warmer drier climates - like Jonathan. It does very well in the northern and central states of the USA, and has the potential for very good flavor.