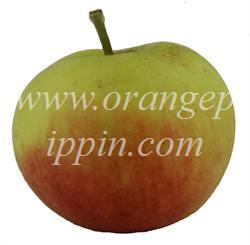 Merton Worcester is one of the first apples developed by the John Innes Horticultural Institute, shortly after it was established in the early 20th century with a bequest from John Innes, a London property developer with an interest in horticulture.  These apples are all named with the prefix "Merton", after the suburb of South London where John Innes lived, and where the Institute was originally based.  (The organisation is today known as the John Innes Centre, and has relocated to Norwich but continues to focus on horticultural research).

Merton Worcester is also probably the most successful of the Merton series of apples, and has been grown commercially on a small scale in England.  However it has never really achieved the commercial success of either its parents - Worcester Pearmain or Cox's Orange Pippin.  It is perhaps best considered as an enhanced Worcester Pearmain, because visually and in terms of flavour it is difficult to distinguish from that variety.  If you like Worcester Pearmain then Merton Worcester is well worth growing for that reason alone - but it is clear that the the aromatic flavours that its developers probably hoped would have been inherited Cox's Orange Pippin did not happen.

Interestingly though, the true potential of crossing Worcester Pearmain with Cox's Orange Pippin was eventually realised - but it took another generation (both human and apple) to appear.  By the 1950s apple research around the world was increasingly focussing on disease resistance and Gavin Brown at the John Innes Institute in Bayfordbury turned to the naturally resistant Merton Worcester as a starting point.  During the 1950s he developed a new variety derived from Merton Worcester and called simply Gavin - which had excellent resistance to the apple disease scab as a result of some complicated crossings with crab apple varieties.  And somehow the aromatic flavour of Cox's Orange Pippin which is latent in Merton Worcester now came to the forefront and the promise of Merton Worcester was at last fulfilled.