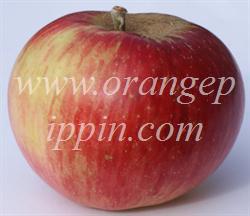 Akane is useful early season apple with an unusually good balance of sweet and sharp flavors.  The flesh is firm rather than crisp, but with plenty of juice.

Akane was developed in Japan in the 1930s, and represents an unusual marriage of the classic English early variety, Worcester Pearmain, and the high quality American heritage apple variety, Jonathan - and it is a marriage that works very successfully.

It is better known in the USA than the UK, despite the fact that it has a very "English" flavour.