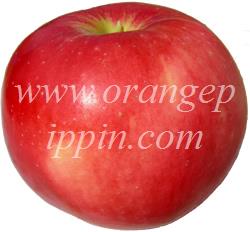 Scrumptious is an excellent modern English early dessert apple, and popular in tasting tests.  It was raised by English apple enthusiast Hugh Ermen in the 1980s and intended for gardeners who wanted an early-season apple variety with a bit more flavour than other early varieties.  Scrumptious is a great example of how growers are once again looking at flavour as the most important characteristic in a good apple.

Scrumptious has the right pedigree, and more than lives up to the expectations set by its parents. It gets its sweetness from Golden Delicious, but there are also the fresh strawberry flavours from Worcester Pearmain and Discovery. The rosy red colouring and white flesh is also typical of Discovery. Whereas Discovery tends to be fairly small, Scrumptious is a bit more substantial and similar in size to a small Golden Delicious.  The colours are also more robust, although like any early apple variety the amount of sunlight in the short growing season can significantly affect the extent of the red flush.  (Later varieties are more likely to have uniform coloration because the amount of sunshine averages out over the longer ripening period).  The occasional flecks of russet are also similar to Discovery.

The flavour is sweet but not sugary - there is a balancing acidity. Although not a hard apple, the flesh snaps cleanly when you bite into it, again rather like a good Golden Delicious. We have also noticed, occasionally, a very slight aniseed flavour.  Don't let this put you off, as it is more of a background sensation than an actual flavour, but it is part of the reason why Scrumptious has more depth of flavour than other early varieties.  This suggests that there could perhaps be some Ellison's Orange somewhere in the mix.  Ellison's Orange has a pronounced aniseed flavour, and is another early apple variety, but with a lot more complexity and richness than the mainstream early varieties.

This is very much a case of the child exceeding its parents: if you like Golden Delicious or are a fan of the popular English earlies like Worcester and Discovery, then you will love Scrumptious. In terms of flavour and instant snack-appeal, it sets a new standard amongst early apples.  Being relatively new, and not popular as a commercial variety, it can be difficult to buy Scumptious apples, but it is now widely available from fruit tree nurseries, and is an excellent choice if you want an early apple variety for the garden.

Update March 2010. Scrumptious has just been given the 'Award of Garden Merit' by the UK Royal Horticultural Society - the first apple variety to be thus recognised for more than 10 years, and a fitting tribute to Hugh Ermen who passed away in 2009 .  For more details see this blog post by Graham Rice. It is in the top-5 most popular apple varieties in the UK.