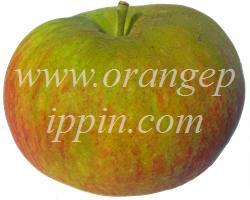 Margil is amongst the oldest of dessert apple varieties grown in England. Robert Hogg, writing in his book 'The Fruit Manual' in 1884 claims that Margil is:

"One of the finest dessert apples, a rival of the Ribston Pippin, excelling it in juiciness, and being of a better size for dessert."

Whilst its origins are unknown Hogg reports evidence of cultivation at Brompton Park Nursery in the 1750s. He also suggests that the variety is French in origin, partly from its name, and partly because one of the partners in the Brompton Park Nursery had previously worked in the gardens at Versailles. This makes Margil one of a select band of apple varieties with a documented history going back more than 250 years.

To apple lovers of the 21st century, Margil is in many ways the most accessible of these 18th century varieties, with more delicacy than Ribston Pippin and a less provocative flavour than Court Pendu Plat or Ashmeads Kernel. It is a fairly small apple, with an attractive flushed appearance, and a strong, clean, well-balanced flavour which puts it very much in the mainstream of Cox-style apples. Only the tendency to russetting might be held against it. Although separated by at least 200 years, Margil is quite similar in flavour to Braeburn, and has no trouble holding its own against modern varieties.

Incidentally, notwithstanding the Cox-like characteristics, there is no known link with Cox's Orange Pippin - which in any case is widely believed to be a seedling of Ribston Pippin. However, trying Margil and Cox side by side, the flattened shape, the flushed russet tones, and the tremendous depth of flavour all suggest that somewhere there must be a common ancestor.

Although it has many excellent characteristics, Margil has faded from view, and is now almost impossible to obtain. However the variety is still available from specialist apple tree nurseries, so this is the best way to experience Margil - and to try a taste straight from the 18th century.