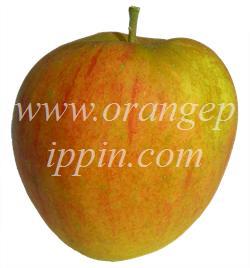 Also known as the Glory of York, this is the most famous variety from the English county of Yorkshire. Ribston Pippin is a strong-tasting 'aromatic' apple, very popular in Victorian times.  The flavour is at its best a month or so after picking, and it can also be used for culinary purposes and for its sweet/sharp juice.

Although a good apple in its own right, the key interest in Ribston Pippin is that it is almost certainly the parent of the world-renowned Cox's Orange Pippin.  It has a stronger more robust flavour than its offspring but is arguably less-refined.  This robustness can be seen in some of the offspring of Cox's Orange Pippin such as Suntan.

Ribston Pippin gets its name from Ribston Hall in Yorkshire where it was first grown in the 18th century.  Given the reverence with which Cox's Orange Pippin was held in late Victorian times, it is not surprising that the Victorian author and pomologist Hogg went to some lengths to trace the ancestry of Ribston Pippin.  He found it listed in the well-known Brompton Park Nursery in 1785, but only a handful were being sold per year -  however by the 1840s this same nursery was selling 2,500 Ribston Pippin trees.  This suggests that the true origins of Ribston Pippin lie back in the early 18th century.  Hogg discovered that in 1688 some apple pips were brought from Rouen in France and planted in the grounds of Ribston Hall, and he concluded that one of these pips was the source of a very old Ribston Pipin tree known to be still standing in 1810.

This would make Ribston Pippin contemporary with, and perhaps in some way related to another well-flavoured 18th century variety Margil, which also had links to France.  It also suggests the nice irony that England's greatest apple was probably descended from a French variety.

In our opinion, comparing the two apples side by side, the hallmarks of Cox's Orange Pippin are certainly present in the flavour of Ribston Pippin, but more as a signpost of greatness to come - Ribston Pippin is a good apple, but not a great one.