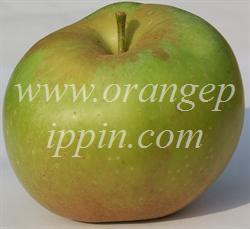 Rhode Island Greening is well-known American heirloom apple variety, dating back to the 17th century.  That makes it a very old apple, indeed there are not many European apples that can be traced back as far as Rhode Island Greening.  Perhaps surprisingly Rhode Island Greening is not a rare antique variety grown by enthusiasts as a historical curiosity, as its vintage might suggest.  Quite the opposite - it appears to have been a commercial variety from the outset and even today is still grown commercially in the north-eastern USA.

The main reason for this enduring success is that Rhode Island Greening is the definitive apple for American apple pie.  It is one of those apples (like the English Bramley) that really benefits from cooking to bring out the full richness and sweetness of flavor.  Whilst it can be eaten fresh after a period in storage, it is essentially a hard and uncompromising apple, far better in the kitchen.

Whereas the English like their culinary apples to dissolve into a puree or sauce, Rhode Island Greening - like most of the popular American cooking apples - tends to keep its shape when cooked.