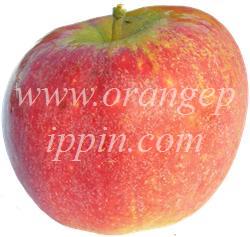 Jupiter is one of several apple varieties that can be considered as close substitutes for Cox's Orange Pippin. It was developed in the 1960s by the famous East Malling Research Station in Kent, with Cox being one of the parent varieties. The other parent is Starking, a sport of Delicious, a widely grown American apple variety originating in the 19th century.

Cox is a notoriously difficult apple to grow, and a great deal of research has gone into developing new varieties that retain the unique flavour whilst being easier to manage. From a commercial perspective many of these offspring are still not ideal - too small, too large, don't travel well, and so on. However many are still nice apples in their own right, often appealing to a wider audience than Cox, and Jupiter certainly falls into this category.

Jupiter is a very pleasant apple to look at. It is basically yellow but mostly covered with the characteristic orange and red flush of Cox. The shape is much more upright than Cox, like many other modern varieties, and has perhaps more "shelf-appeal" than its parent.

The flesh is juicy, and off-white in colour with a hint of green. Like most Cox offspring it is quite dense, firm rather than crunchy, but not soft. The flavour is strong, very "appley", and perhaps more acidic than Cox. An interesting comparison is with Kidd's Orange Red, also the result of a cross between Cox's Orange Pippin and an American variety. Jupiter errs on the sharper side, whereas Kidd's Orange Red is sweeter, and perhaps slightly closer in style to Cox. Purely in terms of flavour (there is not a close family relationship) Jupiter is very similar to Topaz, which also has the same well-balanced sharp strong flavour.

If you like Cox's Orange Pippin, and like a sharper apple, then you can be confident you will enjoy Jupiter. This is a nice example of a modern Cox-style apple, good-looking, and with an appealing robust apple flavour that delivers what it promises.