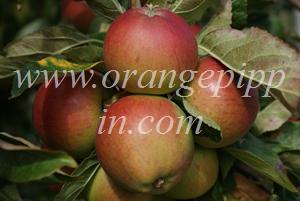 Fiesta is a modern (1970s) English variety from the East Malling Research Station in Kent, sometimes known as Red Pippin. Like many modern apples one of the parents is the classic English Cox's Orange Pippin. Fiesta is a very good substitute for Cox's Orange Pippin in many respects, and whilst it lacks some of the depth and subtlety it is a better choice for the gardener.

The key to the flavour of most modern varieties that have been developed from Cox's Orange Pippin is often found in the other parent. In the case of Fiesta that is Idared, a 1940s American variety which is itself quite similar to Cox. Perhaps it is this similarity which allows the basic Cox flavour to come through quite faithfully in Fiesta.

Fiesta is a medium-sized apple, with the characteristic flecked red and orange flush over yellow - a very attractive autumnal colouring.  It is crisper than Cox, and in some ways a more accessible easier-eating apple than its parent. It is also quite juicy and is a very good variety for making your own apple juice from.

The flavour is essentially sweet, but with some of the rich complexity of Cox, and some good acidity too.  In an average year Fiesta is merely a good sweet Cox-style apple, but in a year that suits it, Fiesta gets very close indeed to the heights of Cox's Orange Pippin.  This can be a really good apple.

Cox is not a great apple for storing, but Idared stores extremely well and can easily last into the following spring in a basic cold store. The longevity of Idared is inherent in Fiesta as well, but although it remains firm, the appealing sweetness seems to disappear after a while - but it remains pleasant to eat fresh and this is definitely a point in its favour.

Fiesta is also an excellent variety for growing in the garden in most parts of the UK, as (unlike Cox) it is easy to grow and crops quite well

The only minor disadvantage is that Fiesta grows in a bizarre straggly fashion, rather more sideways than vertically.  This is definitely not a variety to plant as a specimen tree - it has the growth habit of a clematis!

In summary Fiesta is a good choice for the gardener wanting a Cox-style apple without the hassle. It is easier to grow in every respect than Cox's Orange Pippin yet comes very close indeed in the quality of flavour.