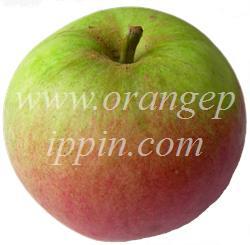 Laxton's Superb is a classic and popular English-style variety from the late Victorian period, one of the high-points in the development of English apples. Laxton Brothers were important breeders at this time and this is probably their most important variety.

Laxton's Superb is essentially a Cox-style apple, but with an interesting twist in flavour inherited from its other parent Wyken Pippin, which had been popular since the 18th century but is now little known. The shape is much more upright than the flattened signature of Cox, and is reminiscent of Adams Pearmain. The colour is dull red flush over green - attractive in a subdued way.

The white-green flesh is quite dense and sweet, and very "appley". The texture is firm rather than crisp, and there is not a lot of juice. Not perhaps characteristics that would endear it to a modern audience, but nevertheless it is actually quite appealing. Like several older varieties it somehow tastes better if you cut it with a knife and eat it in slices or wedges rather than biting into it.

Laxton's Superb represented the state of the art of in English apples at the start of the 20th century, and it is fascinating to compare it with the new varieties such as Meridian and Saturn which have come through at the end of the century. All these varieties use Cox's Orange Pippin as a starting point, but the appearance and combination of flavours in Laxton's Superb makes it very different from the up-front appeal of most modern varieties.