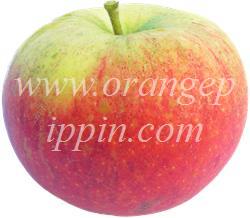 It is a cross between Cox's Orange Pippin, and an older English cooking apple called Peasgood Nonsuch. The result is a versatile apple, which looks like a large Cox's Orange Pippin, with the characteristic red-orange streaks, but sometimes with a more yellow background.

The flesh is juicy but quite light, becoming almost powdery as it matures. The flavour is very sweet, but not bland - it has some of the aromatic qualities of Cox's Orange Pippin and is reminscent of pears.

Charles Ross can be used as a dessert variety. The flavour is quite sharp in September but sweetens if you keep it. It is also a useful cooking variety. When fresh from the tree the flesh does not entirely breakdown into a puree, so it is ideal if you like apple pies with chunky apple pieces. Being quite large and juicy it is also a good variety for making your own fresh apple juice.