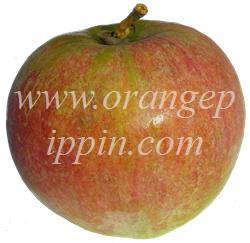 An interesting high quality English dual-purpose apple.  It can be used initially as a baking apple (it keeps its shape when cooked) but after a few months in store the flavour mellows to an intense fruit drop or pineapple flavour.

Allington Pippin was developed by in the 1870s by Thomas Laxton, a nurseryman from south Lincolnshire.  (He later moved to establish his main nursery in Bedfordshire).  It was originally known as South Lincoln Beauty. In 1894 it was taken on by George Bunyard, the owner of the Allington Nusery, which is now a suburb of Maidstone.  He renamed it Allington Pippin, after his own nursery.  Ironically there is also a village in Lincolnshire of the same name.