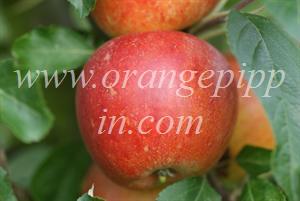 Queen Cox is a self-fertile sport (or possibly self-fertile seedling) of Cox's Orange Pippin.  It has a slightly improved coloration, and the flavour is just as good as the original.

Anecdotal evidence suggests that it is a bit more reliable than Cox's Orange Pippin - though this is still a very challenging variety to grow.

There appear to be two forms of Cox going under the name Queen Cox, although they may be related.  The first form, which is referenced at the UK National Fruit Collection, comes from a natural bud-sport of Cox's Orange Pippin which was found in an orchard in Berkshire, England, in the 1950s.  This form is not self-fertile. This variety is a sport (natural genetic mutation) of: