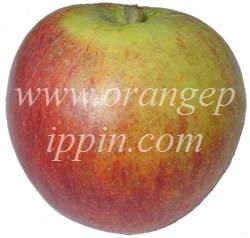 Ellisons Orange is an early (c1905) cross of Cox's Orange Pippin, and without doubt one of the most significant Cox-style apples.  Its depth and range of flavour are in the same league as its parent.

Its uniqueness comes from the strange aniseed flavour which can arise after picking - a facet of the Cox-family aromatic complexity which is not apparent in its parent. In a good year, and soon after picking, the aniseed is subdued or absent and some authorities claim Ellisons Orange can be as intense as Cox. In a bad year though, or grown in the wrong conditions, it can be quite unpleasant. The trick is to remember that Ellisons Orange, unlike most of the more complex apple varieties, is actually a mid-season apple, ripening in the UK in September. Also, like other mid-season varieties, it does not keep especially well.

If you don't like aniseed do not let this put you off because you would be missing a unique taste experience.  Straight from the tree the aniseed flavour is barely detectable, and Ellison's Orange has such a glorious richness of flavour that it is "essential reading" for anyone with an interest in apples.  After a few days the aniseed is slightly more apparent - but merely as a liquorice undertone to a whole array of different fruit flavours.

Visually Ellisons Orange fits the bill as a classic English variety. The flesh is quite soft, somewhat pear-like in texture, and juicier than Cox. Ellisons Orange is certainly a good way in to the Cox-style flavour. Although Cox is readily available in supermarkets from both UK and New Zealand suppliers, it is difficult to get examples which truly reflect its flavour potential - supermarket Cox apples are usually pleasant but do not really live up to the reputation. Ellisons Orange on the other hand - if you can find it - is a more reliable variety.

Ellisons Orange was developed from Cox's Orange Pippin by Rev. Ellison in Lincolnshire, England, at the start of the 20th century. Its other parent is believed to be one of the Calville varieties, originating in France and thought to be very old.

Ellisons Orange has always been moderately popular as a Cox-style apple which is easier to grow than its disease-prone parent. As a result it can sometimes be found at farmers markets or in old traditional orchards. It is also much easier to grow in the garden than Cox - and picked straight from the tree is the best way to enjoy the incredible intense flavours without over-dosing on the aniseed.

Ellisons Orange is an English classic that can undoubtedly claim a place in the first rank of apple varieties.