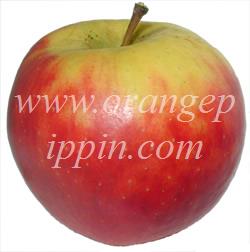 Elstar is another successful offspring of Golden Delicious, developed in the Netherlands in the 1950s. It is a popular easy-eating dessert apple, widely grown in Europe but less well-known in the UK or North America.  There are a number of commercial sports, including Elista and Valstar.

The skin is marbled, often with a soft sheen to it. It also lacks the perfect smoothness of many modern varieties.

The underlying colour is golden yellow but overlaid with deep red.

There is also a "sport" known as Red Elstar, where the red colour usually covers the entire surface with only the occasional peep of yellow.

The flavor can be more intense than is often the case with other Golden Delicious offspring.  It retains the appealing sweetness - usually described as 'honeyed' in most apple text books - but with a good balance of acidity.

Elstar is definitely a crunchy apple, but not as crisp or hard as some - definitely the softer side of crunchy, so a good choice if you have fragile teeth. The flesh is lemon-white.

In most Golden Delicious offspring it is the other parent which provides the essential counter-balance to offset the sweet blandness of Golden Delicious. In the case of Elstar this is Ingrid Marie, a variety which originates from Denmark. Although not a widely-known apple, it lends a bit of extra flavor to the mix - inherited from its own parent, Cox's Orange Pippin.