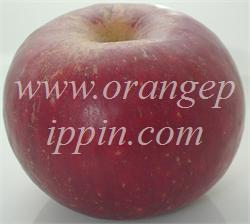 Ingrid Marie is a popular variety in northern Europe but is not well-known in the UK. It is an attractive crimson flushed apple, with streaks of russet. The flavour is quite bland and light, and the flesh is fairly soft - best eaten straight from the tree.

Ingrid Marie was found 1910 in the garden of Hoed School, near Flemloese on the island of Fyn (Funen in English), Denmark. It was named after teacher K. Madsen's daughter, who died very young. It was long believed to have been a chance seedling of Cox's Orange, and this was recently confirmed by research done in Sweden. The father variety proved to be the Danish variety "Guldborg" ("Golden Castle") named after a small village on the island of Lolland. Ingrid Marie's main claim to fame is that it is the parent of Elstar, one of the best modern apples.

Ingrid Marie remains a popular variety for both home gardeners and industry. The red sport Karin Schneider / Red Ingrid Marie is grown in Denmark, Sweden and Northern Germany, i.e. Alte Land near Hamburg. The apple is available in almost every supermarket in Denmark from October-December.

Visitor comments:
"I used to sell this apple in my shop,sourced from a farm near West Malling. I remember it to be a very juicy apple, easy to eat especially for older people and with something of the cox flavour about it. It was extremely popular with my customers until the supplier switched to supplying Sainsburys."  John, Kent, UK