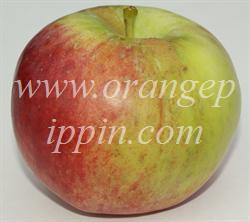 Cortland is a typical McIntosh style apple variety, and ranks about 12th in terms of US apple production.  However nearly all that production takes place in New York State, almost within sight of Cornell University where it was developed in 1898 and introduced in 1915.

Cortland is also widely grown across the border in Quebec and Ontario, and it has proven itself to be well-suited to the freezing temperatures experienced around the Great Lakes.

As with all McIntosh varieties, Cortland is at its best when eaten soon after being picked.  The sweet flavour fades quickly, as does the crispness.

An interesting characteristic of Cortland is that the flesh does not go brown very rapidly after being cut.

The cut-out photo in our description is of a UK-grown Cortland apple, whereas the other photos are from the USA and Canada, showing how the sunny but cold autumn climate of North America produces a better colour than the cloudy mild climate of the UK.