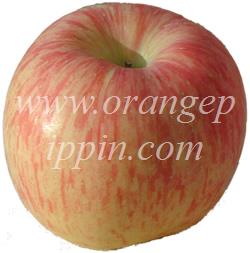 Fuji is surely one of the more attractive modern apple varieties. Its main characteristic is the lovely pink speckled flush over a yellow-green background. It is also crisp and juicy, with dull white flesh which snaps cleanly. The flavor is predominantly sweet, very refreshing (especially if slightly chilled), but not particularly outstanding.

As you might expect, Fuji comes from Japan, where it was developed in the 1940s and released in 1962.  However its parentage is all-american. Fuji is a cross between the widely grown Red Delicious, and Ralls Janet, which is much less well known but is probably the reason for Fuji's attractive pink flush.

In some ways it is surprising that Fuji is not a more popular variety, given its excellent appearance. The obvious comparison is with Pink Lady, and in many respects Fuji has the better appearance - the pink flush has a lighter background and the skin texture feels clean and dry compared to the sheen of Pink Lady. Of course Fuji, being an older variety, does not have the same degree of marketing effort which has supported the rise of Pink Lady. Also, it has to be said that the colour variation of Fuji is quite wide, ranging from from light pink to crimson pink - some of this being the result of the development of a number of sports and variations on the original.

For most of the 20th century the USA dominated world apple production (mainly with Golden Delicious and Red Delicious), but China is now the biggest single apple growing region.  Fuji accounts for more than 70% of apple production in China.