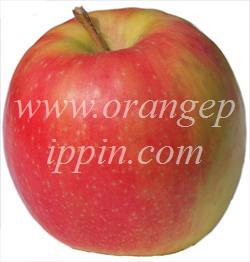 Perhaps more than any other modern apple, Pink Lady® epitomises the trend towards product marketing and branding in the sale of apples. Pink Lady® was one of the first apples to be marketed under a specific brand name rather than by its variety name. The variety is grown under licence, and then marketed through licenced resellers to the supermarkets. This tight control is intended to keep quality high, and it is portrayed as a premium product.

You may have sometimes seen another variety called Cripps Pink in the shops and noticed the similarity ... it is actually the same variety.  Pink Lady® is a trademark, the actual variety name is Cripps Pink.

In order to preserve the premium appeal of Pink Lady®, about 65% of the production which does not meet the standards required for Pink Lady® is sold as Cripps Pink instead. The distinction is primarily made on colour intensity and the sugar/acid balance. Whilst this might at first appear to be a marketing ploy, it benefits consumers because it means that the variability of quality of Pink Lady® is less than you might find in other varieties (Braeburn being a notable example).

Cripps Pink was developed in the 1970s by John Cripps in Western Australia, and is a cross between Golden Delicious and Lady Williams.  This same breeding programme also led to Cripps Red, which shares the same parentage and is marketed under the Sundowner® brand. Lady Williams is not a particularly well known apple variety in Europe or North America, but has been quite widely grown in Australia, having been discovered as a chance seedling in the 1930s. It is probably from Lady Williams that Pink Lady® gets its distinct colouring. (However it is interesting that another modern "blush" apple, the orange-coloured Tentation, is also a Golden Delicious cross).  Pink Lady® and Sundowner® are very similar, but we think Pink Lady® is just slightly closer to Golden Delicious in terms of flavor.

Pink Lady® requires a very long growing period and a hot climate, and hence is only grown in the warmer apple-growing regions of South Africa, USA, southern Europe - and of course Australia.  Strong sunglight in autumn is vital for the pink coloration to develop and growers may remove the top-most leaves of the trees to allow light to penetrate.  Pink Lady® is a moderately vigourous tree and hangs on to its leaves well into winter.  It also shares a characteristic found in some other apple varieties in that the quality of fruit in the early years of the tree is not good.  These horticultural difficulties meant that Pink Lady® was initially unpopular with growers - until they realised the premium prices they could get for this unique pink apple.

Pink Lady® apples from the northern hemisphere tend to arrive in shops from late November - but the very long storage life means they are available almost all year round from northern or southern hemisphere orchards.

Since its introduction several sports or variants have been discovered.  Two of these are Rosy Glow and Lady in Red.  Technically these are separate cultivars (and should be listed as such on this website), but because of the strength of the Pink Lady brand many of them (with the agreement of the trademark owners) are marketed as Pink Lady and consumers are not likely to be aware of the difference unless they are able to see the original orchard box packaging.

Does Pink Lady® match up with the marketing ? Visually, it certainly does - it is still unusual to see an apple that is genuinely pink and Pink Lady® is undoubtedly one of the best looking apple varieties available. We are not so sure the flavour is quite up there with the best modern varieties (take Jazz for example).  Perhaps the most interesting comparison is with its sibling variety, Sundowner® - we think Sundowner® has a slightly better flavour and texture, very similar to Pink Lady® but just a bit more pronounced, although many people prefer the slightly blander flavour of Pink Lady®.  In short, a very attractive apple with a good flavour, and deservedly popular.