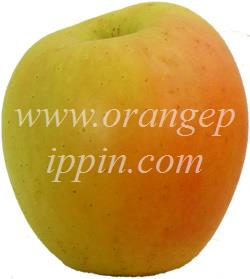 Tentation is a modern variety from France, derived from and very similar to Golden Delicious. The appearance is quite striking, being a light golden green apple with an attractive orange flush. Blushed apples are increasingly popular with supermarkets - in appearance Tentation is quite similar to Pink Lady, except it is flushed orange rather than pink.

As with many modern commercial varieties, marketing and promotion are almost as important as flavour. Tentation is being marketed in particular to female customers.

Tentation was developed in 1990 by the famous Delbard nursery in France, and is a cross between Golden Delicious and Grifer. The flavour is supposedly very good, described by one supermarket as "strong and deep" but by the originators as "delicate". The examples we have tried could best be described as pleasant rather than exceptional, with the underlying sweetness tending towards blandness - pretty much what you would expect from an apple that is in most respects a Golden Delicious. However it is early days for Tentation, and growers and supermarkets are still learning about it. There is no doubt that it looks appealing, and interestingly the orange flush seems to be more prominent in examples coming from the southern hemisphere.