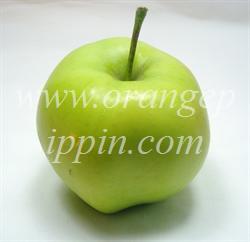 Ginger Gold was discovered as a chance seedling growing near a Golden Delicious orchard in Virginia in the 1960s.  The color, shape, and distinctive long stalk all identify it as a relation of Golden Delicious, yet it has a much earlier season - ripening in mid/late August.  Unusually for an early apple, but again reflecting a Golden Delicious parentage, it is a good keeper and will last several weeks in the fridge.

The flavor is fairly mild, and a bit sharper than Golden Delicious but still sweet for an early variety.  It is equally good for eating fresh or processing.

Ginger Gold is generally considered one of the best early-season apples.