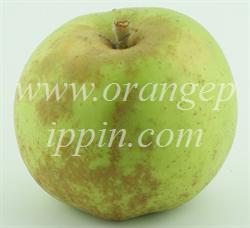 Newtown Pippin is one of the oldest American apple varieties, being well-known in the 18th century and probably raised as a seedling by early settlers on Long Island.  To get a sense of how unusually old it is, it was introduced from the USA to England in the mid 1750s - making it an old variety even by English standards.  Newtown Pippin was popularised by such well-known figures such as Thomas Jefferson and George Washington, and was very much an apple of its time.  It is also often called Albemarle Pippin.

By the 19th century Newtown Pippins were an important commercial variety in the USA, both for domestic use and exported in large quantities to London markets, where the Victorian author Hogg commented on their arrival in January each year.  The appreciation of the flavors of apples reached a peak in Victorian England, and the popularity of Newtown Pippins in Victorian England is a sure sign that this is very high quality apple with the rich aromatic flavor most sought after at that time.  Hogg also commented that the Newtown Pippin could not be grown successfully in England - it needs a hot summer and autumn, and will not ripen properly most years in the cool temperate climate of England.

Newtown Pippin is best regarded as a "winter" apple.  It is picked quite late in the season - late October in the eastern USA.  It is hard and unappetising if eaten straight from the tree, instead it should be stored for 1-2 months, before being used over the winter period.  Newtown Pippin is a notably versatile apple, being excellent for eating fresh, cooking, and for juicing and hard cider.  When cooked Newtown Pippin retains some of its shape, and produces a textured puree with a very good rich flavor - definitely a very high quality culinary apple.

It was noticed by the 19th century that there are two variants or "sports" of Newtown Pippin - green and yellow.  Many apple varieties have produced sports, and growers often favour the more highly colored ones for further development.  However green and yellow Newtown Pippins are not easily distinguished, they are both a greenish-yellow color depending on the location and exposure to sunlight - neither of them is particularly attractive by modern standards.  It is thought that the green version might be the original with the yellow being the sport.

Newtown Pippin remains a popular garden apple in the United States.  It is not without its difficulties - it takes many years to start bearing apples even on dwarfing precocious rootstocks, and it is susceptible to most of the usual apple diseases, as well as having a tendency to become a biennial-bearer if allowed to over-crop.  However its natural vigour usually helps it to overcome these difficulties and its great versatility and excellent flavor make it a worthwhile addition to the home orchard.