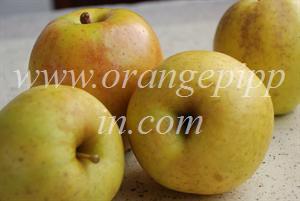 GoldRush is an attractive smooth-skinned modern dessert apple, specifically developed for scab-resistance.  The flavour is good, typical of Golden Delicious but with a bit more acidity.  As a relatively new variety there is not much experience yet, but it appears to be good at most of the things Golden Delicious is good at, including keeping well and with excellent juice.

The variety is derived from Golden Delicious as the seed parent, with crosses from several other research varieties including Winesap, Melrose, Rome Beauty and Malus floribunda - the latter being a well-known source of the Vf scab-resistant gene.

More details of the scientific programme that led to GoldRush can be found at the Purdue University website: http://www.hort.purdue.edu/newcrop/pri/coop38-3.html.  GoldRush is sometimes known by its programme reference Coop38.