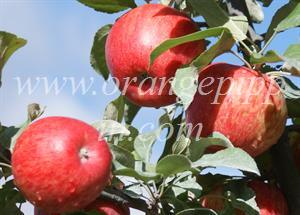 Honeycrisp, or Honey Crisp, is a modern apple variety, developed in the 1960s and introduced to the market in the 1990s - sometimes trademarked as Honeycrunch. It is increasingly available in supermarkets. Honeycrisp comes from a long line of apples developed by the University of Minnesota from the 1930s onwards. One of the objectives of this breeding programme has been to develop varieties which can tolerate the bitter cold of winters in some parts of the USA, and most plantings have been in the northern USA, including New England, Minnesota and Washington State.

The parentage of modern apple varieties is often obscure because they are the result of lengthy breeding programs with cross after cross.  The University of Minnesota initially stated that the original parentage was Honeygold (raised in the 1930s from a cross between Golden Delicious and another University of Minnesota development, Haralson) and Macoun, a well-known American variety, developed in the 1920s.  This seemed plausible, but subsequently the University carried out a DNA test which indicated that the records were incorrect, and suggested Keepsake - another University of Minnesota variety might have been one of the parents.  Honeycrisp does have a close resemblance in flavor and appearance to Keepsake. In 2017 the results of further analyses were published whcih proved that Keepsake was a parent, along with another selection called MN1627 which has now been lost, and that Golden Delicious and Duchess of Oldenburg were grandparents of MN1627.

Honeycrisp is a medium-to-large sized apple, with a light green/yellow background largely covered with red-orange flush with strong hint of pink if grown in good sunlight. The skin may be flecked with occasional russet dots. The flesh is white, perhaps not quite as bright as a McIntosh style apple, but similarly crisp and not too dense.  The colour however can be quite variable.

The flavour is sweet with very little trace of acidity and little depth or complexity. There can also be a trace of pear-drop flavour. In a good example this is a juicy and instantly refreshing apple, in a less good example it will be simply sweet and bland (but still very nice).  As its name suggests this is genuinely a crisp / crunchy apple.  However since the flesh is quite light, the crunch is surprisingly soft, nothing like the hard crisp crunch of a good Golden Delicious.

Surprisingly for a modern commerical apple variety, Honeycrisp tends to bruise easily, and therefore is usually sold in packs rather than loose. Northern hemisphere fruit ripens relatively early in September. The apples keep until April in storage and retain their crispness.  Interestingly it appears that the flavour can improve for 7-10 days after being taken out of cold store, which means that stock taken from cold store and then purchased by consumers is likely to be in optimum condition.  In contrast many apple varieties held in cold store tend to ripen and then go past their best very quickly once they are taken out of storage.

Honeycrisp has proven to be a good variety for the commercial grower and also the backyard orchardist.  It has good disease resistance and although developed for cold-hardiness, appears to have a very wide climate range.

Honeycrisp has become a runaway success in the USA, with demand regularly outstripping supply.  The flavor whilst not outstanding is certainly very good, making it a very enjoyable and undemanding apple, particularly if cooled in the fridge before eating.  In Europe it is sometimes marketed as Honeycrunch.