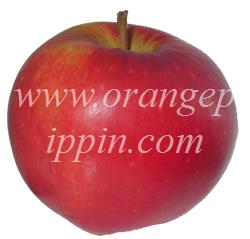 Saturn was introduced in 1997 by the famous East Malling Research Station in Kent, England. As such it reflects the "state of the art" in the development of new apple varieties in the UK.

Saturn is a medium-sized apple, smooth, rounded and with a lime green skin, largely covered in a deep red flush. The appearance is perhaps not quite up to the standard of some other modern varieties, but the flavour is particularly good. It is sweet but with a dollop of juicy acidity, and the sweetness has a good "apple" presence, rather than being sugary-sweet. It is firm to the bite, but the flesh snaps cleanly, and is very juicy. In short, a very appealing apple which will not disappoint.

Disease resistance is an increasingly important attribute for modern apple developers, as growers seek to reduce the amount of pesticides used in their orchards.  The challenge is to come up with an apple which has the flavour modern consumers want, is easy and productive to grow, and yet has none of the undesirable side-effects often found in experimental varieties bred exclusively for disease resistance.  Saturn is a typical example of this development process, being a cross between an un-named scab and disease resistant variety (PRI 1235) and a sport of Golden Delicious (Starkspur Golden Delicious).  We understand the un-named hybrid is distantly related to Jonathan, a high-quality American apple.

Note that many authorities incorrectly state that Saturn is related to Falstaff and Cox's Orange Pippin.

Although aimed at commercial and organic growers, Saturn could have promise as a garden variety, since the built-in disease resistance makes it very suitable for the "un-treated" regime favoured by many gardeners.

It is interesting to compare Saturn with Meridian, another modern variety from East Malling Research Station.  We think Saturn has marginally more depth to it than Meridian - but these are both nice apples.