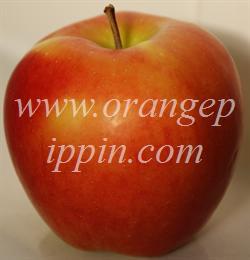 Ambrosia is an attractive medium-sized apple, with a pink-tinged orange/red flush over a yellow background.  As such it is very much in tune with the modern preference for "bi-coloured" apples.

The flavor is pleasant and sweet, but one-dimensional in that there is no acidity to balance the sweetness - which is not necessarily a bad thing of course.  The texture is essentially crisp, but not as crisp or hard as a Braeburn or Jazz - it is more the slightly softer crunch you might find in a Golden Delicious.  Ambrosia benefits from being kept chilled and eaten from the fridge, because the crispness fades fairly quickly once it is left in the fruit bowl, and at this point it can become slightly pear-like.  If you wanted to pigeon-hole Ambrosia, it is best thought of as a red/orange colored Golden Delicious with a flavor which is not quite as sweet.  Certainly anyone who likes Golden Delicious but wants something a little bit different will like Ambrosia.

Ambrosia originates from western Canada and as with most modern varieties, production and quality are closely-controlled by the brand owners- PICO (Okanagan Plant Improvement Company) in western Canada.  New plantings are also being established in Washington State in the USA, and in the Piedmont region of Italy.  Although Canada is usually considered as a cold-climate growing region, the Similkameen and Okanagan valleys of southern British Columbia are semi-arid and apples are grown alongside grape vines and other warm-climate crops.

Ambrosia is unlikely to be available to private individuals, but when grown in commercial orchards, the best rootstock appears to be M26 rather than the more usual M9.

Unlike most other modern varieties, Ambrosia is not the result of a lengthy scientific breeding programme, but instead originated the old-fashioned natural way as a chance seedling in an orchard.  Ambrosia was discovered by Wilfrid and Sally Mennell growing in their orchard of Jonagold trees in the Similkameen Valley in British Columbia, western Canada. The parentage is therefore unknown, but it seems likely that it is a cross between Jonagold, and Golden Delicious which had been growing in the same area previously.  In terms of both flavor and appearance Ambrosia is almost exactly what you might expect such a cross to be like, with the flavor very much from the Golden Delicious side of the mix (bearing in mind that Golden Delicious is also one of the parents of Jonagold), but the visual appearance quite influenced by the Jonathan.

We are grateful to Elam's Organics for information about the origins of Ambrosia.  For more details see: http://organicambrosiaapples.com/origins.html